The work in this exhibition is the result of a move into a new studio in the summer of 1979. It represents a major shift in my paintings in terms of colour and, to a lesser degree, of pictorial content.

I have been concerned with nature and the landscape for many years, even before I started to paint. My very first paintings adopted a stance of direct observation in the manner of the nineteenth century realists, and my present concerns have evolved from this. They are the physical phenomena which produce a landscape, be it on a global or local scale, as well as a ‘direct visual’ response.

The paintings can be seen on one level as a retrospective reference to nature / landscape through observation, and theoretical knowledge of various physical phenomena which produce the landscape: the Science of nature.

In this exhibition most works bear the title ‘Plate Tectonics series No..’ Plate Tectonics is the science of Continual Drift, in which the earth acts as a series of interlocking plates grinding and shifting against each other, moved by tremendous convection currents generated by the earth’s mantle. The immensity of pressure and the slowness of movement as solid granite flows like water on a time scale of aeons and is as important as retinal images. The paintings can also be seen on the level of pure, formal values, to which all non-representational art aspires. 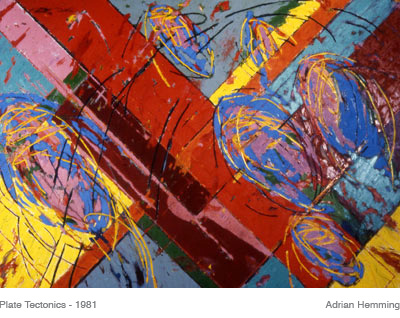 Next >
© 2021 Adrian Hemming | All Rights Reserved | Website by easykey.net