Think of Michelangelo and you picture a macho Charlton Heston manically chucking buckets of paint all over his Not-good-enough-for-a-genius-like-me image of god on the Sistine Chapel ceiling. Think of Van Gogh and it’s either Kirk Douglas, dimple tightly clenched, thrusting his palm over the candle flame or a deranged Tim Roth sucking oil paint from his brushes. Eighties New York Expressionist painting throws up Martin Scorsese’s boorish testosterone fuelled Nick Nolte, strutting around in a football pitch sized loft clutching his dustbin-lid palette, slapping paint over a gargantuan canvas like a squeegee-bandit’s soap on a car windscreen. And then there’s Reno, the ultimate weirdo artist with off-beat DIY skills in The Driller Killer driven to lunacy apparently just because he’s a painter.

Stereotyped artists on celluloid have reinforced the general public perception of painters, in particular, as a peculiar breed of eccentric single-minded obsessive’s. Artists are a bit different, it’s implied – controlled by some strange compulsion – not quite like everybody else….. The reality, of course, is usually comparatively tame, involving dull routines, persevering with ideas and nowadays especially, an increasing necessity for prowess as a self-publicist. 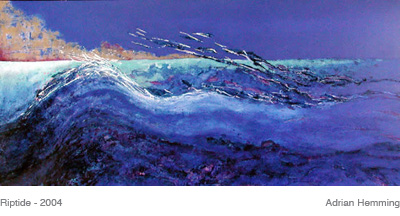 However, although he is not one for hand-immolation or paint-ingesting and falls woefully short of the Heston physique, Adrian Hemming is a painter who naturally epitomises a nostalgic and rather romantic notion of how artists are commonly perceived in films or books. Not, thankfully, in such an extreme or egotistical sense as say, Nick Nolte’s character, since he strives to merge his work and his way of living into a mutually fulfilling idyll. Because, his bohemian streak and inquisitive nature are genuine, the cliché of any arty-affectation is inappropriate.

Adrian’s motivation stems from the way he structures his life around his painting. His travelling is an essential ingredient and he will return form a trip to, maybe Australia, Mexico or Skyros, plaster his walls with the pictures he has made out there and enthuse wildly about his work plan for the ensuing months to the nearest available victim. The long redundant dirge about needing to suffer for your art can look positively ridiculous in the context of this spectacle. He also has a naïve but admirable expectation that the bank manager will understand just exactly why he had to spend all that money on expensive meals in foreign countries.

Adrian’s work reflects his impulsiveness and indefatigable energy not only in its visual content, but also in the manner in which it is executed. This can be a combination of both spontaneity and methodical deliberation with the structure of the painting often shifting radically as the ideas evolve. He is an unusually physical operator, painting with the zealous urgency one might more readily associate with a chef in a busy restaurant (Adrian is in fact also a very good cook).

As he stomps around attacking the canvas – singing loudly (usually with the wrong words and often the wrong tune) – eventually standing back and triumphantly shouting : ‘Ade, I think I’ve cracked it!’, he could easily be some larger than life fictional artist – but happily more along the lines of Gully Jimson in The Horses Mouth than Reno and his rechargeable drill.

Ultimately, one could say that the vigour and vivid colour of Adrian’s work embodies his passion for living.